A Personal Perspective on Testing for Prostate Cancer - 2013

In Australia, over 3,200 men die from prostate cancer each year.  This is a greater number than the women who succumb to breast cancer each year.  Irrespective of what the denominator is in terms of how many are diagnosed each year, as the second greatest cause of cancer specific deaths in men (after lung cancer), it is continues to astound me that anybody can sweep these facts under the carpet.  But to give the denominator, number of men who are diagnosed with prostate cancer in Australia each year currently sits at just under 20,000.

It is well recognized that not all men diagnosed with prostate cancer will actually die from their cancer but will instead die from some other cause.  The majority of cancers will follow an indolent slow growing course and will never cause harm. This said, these statistics include men who in spite of dying with prostate cancer (and not from it) have significantly suffered from the effects or treatment for advanced prostate cancer or were successfully treated for prostate cancer that otherwise have lead to a prostate cancer related death.

The overzealous desire to fight prostate cancer has had significant consequences.  Many men who did not need treatment have been unnecessarily treated and of these, some have experienced complications associated with radical treatment.  This has been a huge problem and with its recognition, attempts are being made to rectify this problem.  Significant progress has been made in getting smarter about who needs treatment and also reducing the risks of complications associated with treatment.

Not all men diagnosed with prostate cancer need treatment.  There has been a major shift towards treating early stage prostate cancer conservatively by what we call active surveillance and watchful waiting.  Active surveillance differs from watchful waiting in that curative treatment has not been ruled out.  Active surveillance is a program of monitoring that attempts to strike the right balance between avoiding the overtreatment of prostate cancer yet at the same time attempting to minimize of missing any window of opportunity to deal with the cancer should it subsequently prove itself to be more aggressive than originally anticipated. Protocols for active surveillance vary but contemporary monitoring includes monitoring PSA blood test levels and periodically carrying out MRI scans of the prostate or progress biopsies.  If there is evidence that suggests that the cancer is more aggressive than originally thought or if the disease appears to have progressed, the option of treatment remains on the cards.  Watchful waiting implies that curative treatment has been ruled out and monitoring is carried out until such time that the disease progresses to justify the commencement of palliative drug treatment in the form of androgen deprivation therapy (commonly referred to as hormone therapy).

Now on the issue of PSA blood testing, there have been quite polarized views on whether it should be performed or not.   I have tried to avoid the word ‘screening’ because I think that most of us who have in the past supported this approach have moved very much towards selected testing on an individual basis where each man as an individual has the opportunity to participate in the decision to undergo testing or not.

I think that it is time that those who so vehemently oppose PSA testing should acknowledge that an entity that is the second greatest cause of cancer related death in men is a public health problem.  It is also time to stop assertions that if a PSA test is abnormal that it leads to a high risk of complications with the biopsy and that should cancer be confirmed that it some form of aggressive intervention will invariably follow.  Additionally, we have moved on from the outcomes of 20years ago in that treatment is NOT invariably associated with incontinence and erectile dysfunction. 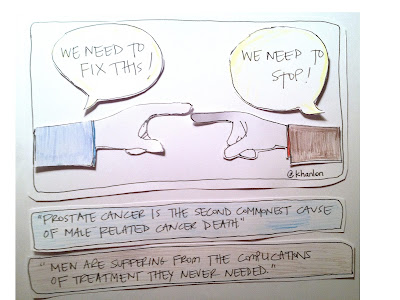 The answer for PSA testing lies somewhere between widespread population screening and totally opposing any form of testing at all.  I am looking forward to those who have vehemently opposed any form of testing for prostate cancer to acknowledge this as well. 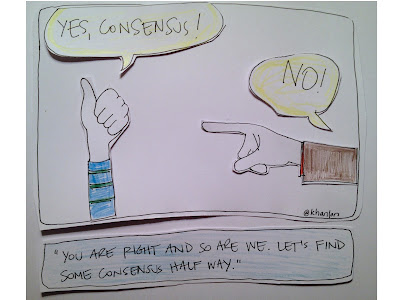 I am NOT in favor of indiscriminate population screening for prostate cancer.  Men should be risk assessed as to whether the benefits of making a diagnosis of prostate cancer individually outweighs the attendant risks.  Men should NOT be denied the right to participate in any discussion regarding a decision to undergo prostate cancer testing or not.  I completely disagree with any assertion that there should no discussion about prostate cancer testing unless raised by the patient.  When men are counseled on making a decision as to whether or not they wish to be tested, they should be given information that is relevant to their individual circumstances.  The Melbourne Consensus Statement on Prostate Cancer Testing is a good place to start.

Acknowledgement:  I wish to thank Katy Hanlon for creating the images that accompany this piece.  Katy can be contacted on Twitter @khanlon
Posted by Henry Woo at 8/25/2013 06:22:00 PM

Henry Woo
Henry Woo MBBS (Syd) DMedSc (Syd) FRACS(Urol). Henry is a urological surgeon subspecialised in the care of prostate cancer and benign prostatic hyperplasia (BPH). He is Professor of Surgery at the Sydney Adventist Hospital Clinical School of the University of Sydney. He is also the Director of Uro-Oncology and the Professor of Robotic Cancer Surgery at the Chris O'Brien Lifehouse. The opinions written in this blog are his own. Please follow me on Twitter @DrHWoo