The discussion on the GMC-UK guidelines on doctor behavior on social media has proved to be most controversial and divisive.  I think that the vast majority of doctors really could not care less but most of these are those are probably not participating in social media in any form. 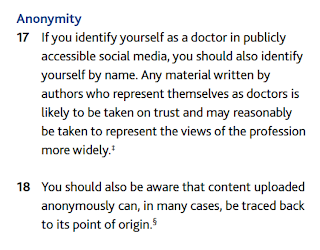 I have watched with great interest, the arguments put forward by those who oppose Point 17 in particular.

It is also interesting to see how the debate has those in opposition discussing the policy as if the word “should” is “must”.  There appears to be some paranoia that the ‘should’ could become a ‘must’ over time but my own thoughts are that the GMC are unlikely to be bothered or would have the resources to police such a rule.  If doctors do behave themselves professionally on social media and provided there are no regular reports of unprofessional behaviour on the front pages of newspapers, it is unlikely that the ‘should’ would ever become a ‘must’.

The debate has become quite emotive.  It was implied to me that I was being hypocritical in my views and sending mixed messages on the basis that my avatar on twitter has an image of me wearing loupes and a headlight and therefore obscuring my face.  I totally disagreed in that the picture perfectly reflects what I do in my work and that my name and details in my bio are totally unambiguous as to who I am and what I do and where my interests lie.  Additionally, pictures of me without the ‘theatre armour’ are easily found on a simple Google image search.

Some of the arguments I have seen include:-

Doctors will disappear off Twitter and interaction will be lost

One argument put forward is that without the anonymity option, doctors will disappear off social media and interaction will be lost. I disagree totally.  We only have to look at conference tweeting – at the recent 2013 Social Media and Acute Care Conference (SMACC), over 1200 users contributed to the hashtag for the meeting and the substantial majority were using their real name or at least had a link that would identify who they were.  The interaction was outstanding and the comraderie associated with knowing with whom individuals were interacting and the excitement with tweetups was palpable for anybody following the hashtag.  This data does not suggest that doctors on twitter are going to disappear.

A similar interactivity was seen with the 2013 European Association of Urology Congress – again, almost all users being identifiable.   Additionally, we only have to look at weekly twitter discussions where doctors are significantly involved and again the substantial majority are using real names – good examples are #hcsm, #hcsmanz, #meded. More recently, a highly interactive twitter journal club has been in operation and this has been a perfect example of doctors interacting and again, this is not likely to go away - incidentally, all doctors involved in the #urojc are using real names. What about doctors interacting with patients and other health professionals? this will continue and a great example of this is with #hcsmanz and #healthychat

Can doctors be trusted to exercise professionalism online?

Largely yes.  Sadly, we need regulations to ensure that doctors understand what constitutes unprofessional behavior.  Doctors could easily argue that we do not need to have a regulatory body to tell them not to have a sexual relationship with their patients – whilst having such regulations does not always work, I have little doubt it has made many doctors think twice before embarking upon such a path.  Doctors can be trusted but a guidance on appropriate behavior can make a difference to those wavering on taking a wrong path.  That said, remember that the guidance says ‘should’ and not ‘must’.

That doctor anonymity will help protect identification of patient cases being discussed.

What the ...?  Patient histories should not be discussed in a public forum FULLSTOP.  There are plenty of other avenues (including online) to discuss patient histories amongst colleagues and twitter and facebook are in my opinion inappropriate.

Suggestions have been made to run two accounts - If one account is anonymous and the other under a real name, then the user is bound to get them mixed up

Why, when patient safety is not an issue?

As recently as last week, I have seen anonymous doctors on twitter giving personal medical advice without so much of a less than 140 character history and without even cursory view of imaging.  The lowest common denominator factors into why there is a need for professional guidance documents.

That doctors should have the right to be anonymous in their social media activities just like any other profession.

Doctors are NOT just like any other profession.  There is a level of personal trust and privilege and power imbalance in the relationships that doctors have with their patients that is consistently there like no other profession.  Doctors CAN engage on social media anonymously – this right is NOT being taken away.  It is however, stated that doctors who want to say that they are doctors SHOULD (not MUST) identify themselves.  Doctors can therefore continue to tweet and blog anonymously but should not make representation to themselves being a doctor.   In my earlier blog piece on this matter, there may be exceptions as to why a doctor needs to be anonymous and these could be stated in the bio or a link to explain why a nom de plume is being used - I think that this would be the fair and transparent thing to do.  I think that the public have a right to know why a doctor feels the need to be anonymous given the special status that the profession holds within the community.

Doctors will feel unable to comment on medicine and medical politics

Anybody is free to comment on medicine and medical politics.  If they do not include that they are a doctor in their bio or links on the bio, there is no reason why they cannot continue.  It is not essential to be a doctor to comment on medicine or medical politics. Other professionals such as biochemists, scientists, those in the pharmaceutical or medical device industry often know a great deal about medicine without having to be doctors.  If one feels a need to state that they are doctor because they want the credibility that comes with that, then they 'should' use their real name.

There are valid reasons to be anonymous

This is something I do agree with.  Particularly with whistle blowing and for doctors working in small communities.  Additionally, if you want to actively debate controversial emotive topics that can truly put ones safety in danger such as abortion issues, this is also a valid reason.  These doctors have good reason to not comply with 'should' and could make good argument to the case.  To quote the GMC guidance:-

'You should’ is used when we are providing an explanation of how you will meet the overriding duty. ‘You should’ is also used where the duty or principle will not apply in all situations or circumstances, or where there are factors outside your control that affect whether or how you can follow the guidance.

In conclusion, I think that for most this will end up being just a storm in a teacup.  Several commentators are propagating the argument that 1+1=3.  The suggestion that doctors who say that they are doctors 'should' (not MUST) use their real name is my opinion perfectly reasonable. As per point 17, "Any material written by authors who represent themselves as doctors is likely to be taken on trust and may reasonable be taken to represent the views of the profession more widely."


Update
The following piece has been published on Croakey on crikey.com.au - strong recommend that you have a look at this as well
http://blogs.crikey.com.au/croakey/2013/04/05/its-all-just-a-social-media-and-medicine-storm-in-a-teacup-says-one-surgical-tweeter/

Henry Woo
Henry Woo MBBS (Syd) DMedSc (Syd) FRACS(Urol). Henry is a urological surgeon subspecialised in the care of prostate cancer and benign prostatic hyperplasia (BPH). He is Professor of Surgery at the Sydney Adventist Hospital Clinical School of the University of Sydney. He is also the Director of Uro-Oncology and the Professor of Robotic Cancer Surgery at the Chris O'Brien Lifehouse. The opinions written in this blog are his own. Please follow me on Twitter @DrHWoo